I took a trip up to San Francisco’s Exploratorium, some two weeks past. Though recently relocated, the Exploratorium is comfortably familiar. It’s still packed with exhibits that span the spectrum from mystically enchanting (one station lets museum-goers create delicate purple auroras that warp and spiral in a glass tube) to delightfully curious (another rapidly spins dozens of Lego Batmen and dolphins, making them dance to the tune of the Caped Crusader’s catchy theme song). 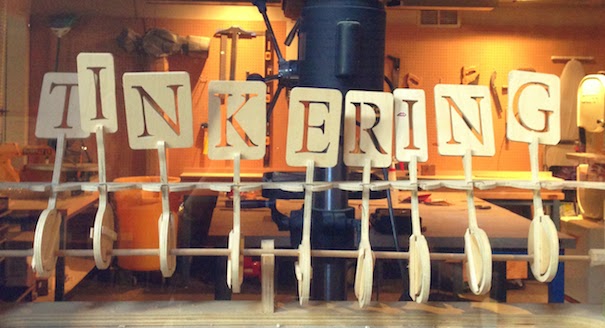 Exhibits at this unconventional museum are designed to stir your curiosity. It’s hard to resist playing with them, but of course there’s no need to — almost everything is hands-on. Photo by Sara Yang.

I meandered through the museum, all the while searching for a particular treasure. Just before the closing bells rung, I stumbled upon it: the cloud chamber, a large, humming, refrigerated box with a sky-facing window that allows for the observation of cosmic radiation. Cosmic rays hail from the beyond the solar system. They collide in the earth’s atmosphere, and minuscule particles rain torrentially upon us in the aftermath. The cloud chamber makes an otherwise imperceptible and invisible downpour from the heavens palpably visible, if only for a fleeting moment. 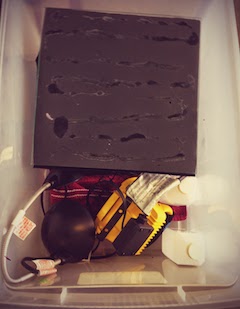 Our homemade cloud chamber consists of a small box with a lid lined with black felt. In order to nudge muons into uncloaking themselves, we douse the felt with isopropanol and heat it from above with my desk lamp.

The sight brought me back four years, to the first time I saw muons zip hither and thither through the same chamber. I had spent the better part of that year in my garage, tinkering with a friend of mine by the name of Hemanth on our own chamber for a science project.

On a nostalgic whim, I called up Hemanth the next day. We decided to fire up the chamber once again, for old times’ sake. We scrounged the necessary components, lugged them to Hemanth’s garage, and got started. Pulverizing dry ice, we began working to the sound of snow crunching underfoot and the sight of fumes eddying about. 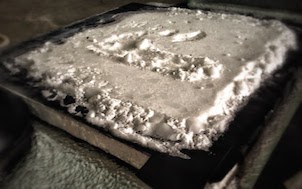 With thick gloves and sturdy hammers, we first crush the dry ice into a coarse powder and pack it tightly into a Styrofoam base, on top of which the chamber sits. The one-two punch of a cooling source and a heating source forces the alcohol into a supersaturated, supercooled state. Muons streaking through the chamber rip electrons off the vapor, causing water molecules to visibly condense around their paths.

I followed our procedure as if on autopilot; my mind wandered and let bittersweet memories leak. We packed the dry ice into a foam base (days colored by failed prototype runs), doused the chamber with isopropanol (afternoons brightened by faint flashes of muons), and positioned my lamp atop the box (nights illuminated by the bluish glow of computer monitors). 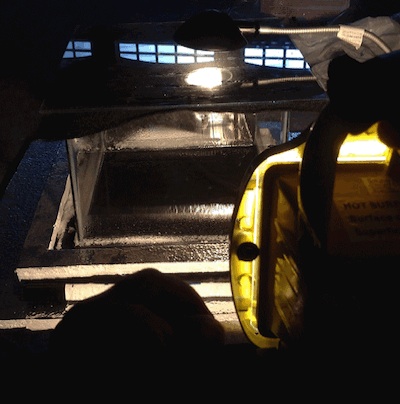 Our small glass box held us rapt, as we saw the ghosts of muons pass through it. Unfortunately, the streaks are difficult to capture on camera.

We left the chamber to run for some time. When we returned, muons were streaking visibly through it. Spellbound, we lingered by the chamber for over half an hour. Four years ago, an anxious desire to create something novel and a preoccupation with results left little room for wonder. Now, we could stare into the cloud chamber for but the simple sake of doing so. The muons that passed through it, falling like delicate strands of spider web, were, paradoxically, both otherworldly and earthly. Our small glass box, glued together by a mom-and-pop craft shop, had become a window into the universe’s secrets. The sight was as humbling as it was beautiful.