Last year, Future Business Leaders of America worked with NASA and commercialized technological patents. This year, they have chosen to work with clean water and developing nations.

Every year, FBLA competes in the Partnership with Business project, in which the club partners with an organization and provides them with services, such as marketing. In turn, members receive business experience. This year, PWB chairs junior Peter Choi and sophomore Minolee Vora are partnering FBLA with the social enterprise NIKA Water, a company that donates all of its profits to promote clean water in developing countries. 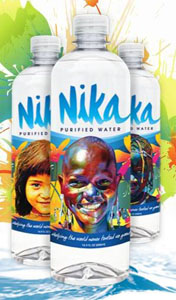 NIKA water dedicates 100 percent of its profits to help provide third world countries access to clean water. FBLA is partnering with NIKA water in order to emphasize the compatibility between business and philanthropy. Screenshot from Nika Water.

Vora and Choi’s decision to partner with a social enterprise was primarily fueled by their desire to find a balance between business ambition and philanthropic principles.

“Many people when they see [businessmen] stereotype us as ‘people that want to make money…[and] make our world dirtier,’” Choi said. “Social enterprise is the happy medium between helping people and the business world…it’s breaking that stereotype that business people are selfish.”

In order to achieve this goal, FBLA’s PWB project will consist of two components: awareness and marketing. Students will attempt to increase awareness regarding how NIKA Water can alleviate the difficulties of those that lack clean water. For instance, FBLA plans to hold a citywide walk-a-thon to promote NIKA Water’s charitable cause.

“Within a couple weeks, water bottles will be shipped onto their shelves,” Choi said.

A tentative future goal for FBLA is to connect NIKA Water with Product Red. Product Red sells red versions of other companies’ products, like iPods, and donates 50 percent of their profits towards AIDS research Africa. According to Choi, establishing a connection between these two companies would benefit NIKA Water and provide business experience to FBLA’s members.

“We’re trying to get members to actually design red [water bottles] and see if we can get it onto NIKA’s nationwide market and…sell it all across the world,” Choi said.

Both Vora and Choi hope that the partnership with NIKA Water will help others understand that business and charity can coexist.

“It’s not just about making money all the time,” Vora said. “You can make money and help people in need.”