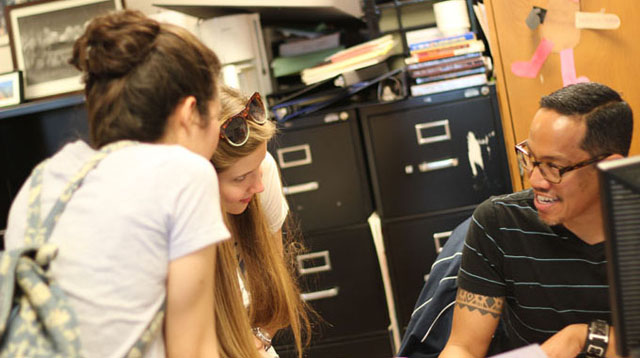 Class of 2011 alumni Kasia Gawlas and Karina Fathi speak with English teacher Robert Javier on June 9, the day of graduation. Gawlas, an administrator of the Facebook group “Save Robert Javier and Debbie Vanni!”, helped coordinate students’ dissenting response to the transfers. Photo by Kevin Tsukii.

“English Department is not a conducive learning environment”
Both teachers received letters about the transfer. In the letter addressed to Vanni, Avvakumovits wrote that the transfer was “in no way to be intended as a disciplinary action against [Vanni];” rather, the reason for the transfer stemmed from FUHSD’s conclusion that “the English Department [at MVHS] is not a conducive educational environment and that it had a negative impact on the educational environment at the school and on the welfare of the employees in the department.”

Javier and Vanni, who have been at MVHS for 16 years and 22 years respectively, noted that communication issues may have resulted in what Vanni described as an “intense” February meeting with the English department, MVHS administration, and a Fremont Education Association representative.

“[It] was one particular meeting where things became very vocal. It stemmed from frustration… I felt that I was not getting the information I needed,” Vanni said. “I was department chair, a lot of teachers were coming to me and were saying, ‘What’s going on?’ And so when an administrator came to our meeting, that person was confronted and asked [why the department wasn’t being informed].”

Javier noted that although he was involved in the meeting, administration did not communicate any dissatisfaction with him after February. Both Avvakumovits and administration declined to comment, stating that the transfers were a personnel issue, as outlined in the Collective Bargaining Agreement between the Board of Trustees of FUHSD and the FEA.

“Where we’re at right now does come as a surprise,” Javier said in reference to his transfer to FHS. “I was never, ever talked to regarding my professionalism or behavior with colleagues or students. To my knowledge, I’ve been doing my job this entire time.”

Though she addressed the issue with her students in her classes, English teacher Mikki McMillion, among others in the English department, declined to comment for this story, stating that she felt it was an unsafe environment to talk about the situation.

The student response: virtual organization
“The fact that someone can be moved after 22 years is a little bit fearful,” Vanni said. “[But] big sweeping changes in the world come when people are not afraid and they take chances… this is what I teach [students] in my class—speak your piece.”

Javier and Vanni’s transfers have indeed sparked a vocal response from many students aiming to express their disapproval of the teachers’ departures—over 350 students have joined a Facebook group titled “Keep Robert Javier and Debbie Vanni!” The group’s administrators are class of 2011 alumni Alex Bagdasarian, Allison Sanders, Jonathan Yee, Sean Hughes Yash Chitneni, and Kasia Gawlas, who all grew close to either Javier or Vanni during high school.

“We kind of felt that [administration] had tried to pull the wool over our eyes… by [making the notifications about the transfer] on the last day of school [for seniors],” Gawlas said.

Javier expressed appreciation for the students’ response to his and Vanni’s transfers.

“Just knowing there’s such an overwhelming outpouring of emotion compensates for everything that’s going on,” Javier said. “It reminds me of exactly the kind of teaching job I’ve done here at [MVHS], and I couldn’t be any prouder of these students.

Students speak out
Protests against the transfers were organized through the Facebook group, which has served as a venue for students to coordinate their efforts in letting administration know that they don’t support Javier and Vanni’s transfers.

Students sent about 20 letters to the district office, had parents call administration, and protested during third period finals on June 8 near the main office by reading out testimonials about Javier and Vanni with a megaphone and posting a sign that read “We support Robert Javier and Debbie Vanni”. They were relocated to McClellan road, however, because according to AP Secretary Deb Mandac, the sign failed to meet the school’s poster policy—all posters must be approved by Club Commission or administration and hung only in designated areas.

An attempt was also made, after much debate on the Facebook group, to chant Javier and Vanni’s names after the tassel turn at the end of graduation. The intention was to show support for the teachers and get the attention of administrators and board members at the ceremony, but the chant was inaudible over the band and cheers of other students.

“How is it that moving these teachers is going to make [MVHS] a better place… not just for me, but me as a part of this community?” Voleti said.

A group of graduates attended the June 14 FUHSD Board meeting to voice their support for Javier and Vanni, as well as their concerns about their involuntary transfers. Among the graduates, who constituted the majority of the meeting’s 27 attendees, recent MVHS graduates Michelle Hara and Kristen Tatsuno emphasized Javier’s abilities as a teacher.

“Honestly, the reason I’m here is because I wanted all my friends who were juniors and sophomores to have [Javier] too,” Tatsuno said. “I know that the one reason [one of my friends] signed up for AP Lit is because I told her that ‘You need to have Javier. He needs to teach you at some point in your life.’”

During the meeting, six graduates delivered speeches regarding Javier and Vanni’s involuntary transfers. Class of 2008 alumnus Venkatakaushik Voleti spoke specifically to his experiences with Javier.

“He was always the kind of person who would listen to every single person’s point of view,” Voleti said. “But even more than that, I respected that he would always contest people’s point of view… And that was something that helped me personally in an innumerable amount of ways… How is it that moving these teachers is going to make [MVHS] a better place… not just for me, but me as a part of this community?”

Several other speakers also spoke to what they called “a disconnect” between teachers and the district regarding the transfers. Board member Barbara H. Nunes emphasized that the Board could not comment on non-agenda items, which included the content covered in the speeches. Nunes did state, however, that the Board has invited Javier and Vanni to a meeting to further discuss the transfers, after recent graduate Jonathan Yee, among others, said in his speech that students had been “left in the dark”, and that Javier and Vanni felt that they were not given legitimate reasons for the transfers.

Neither administration nor FUHSD have indicated that the transfers are being reconsidered.

English teacher Stacey McCown, who was unreachable for comment, has been transferred to Lynbrook High School. The nature of her transfer remains undisclosed.