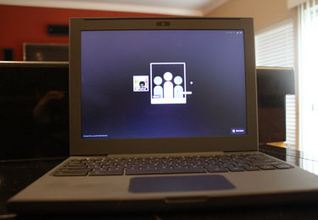 The Cr-48 showcases Google's Chrome OS, an operating system designed around cloud computing. Chrome OS may be ahead of its time as cloud computing remains in its nascent stages. Photo by Akshay Agrawal.

Gone are the days when Google was simply a search engine. It has spread its reach to various other virtual fields, including email, online documents, and even tablet computing. Now, the company has invaded the realm of cloud, or web-based, computing with their Chrome OS. Cloud computing, the focus of the Chrome OS, is the idea that all data can be stored in and accessed from the Internet.

With the Cr-48, Google primarily wants to show off their software. The Cr-48 will likely never be sold to the public—instead, other companies will choose to utilize the Chrome OS on their own commercial laptops.

Google’s idea of a cloud-centric laptop is novel, but its bare-bones simplification may alienate potential consumers.

Chrome OS: an Overview
As soon as the Cr-48′s lid is opened, Google’s colorful logo paints the screen, and within 15 seconds, the web is at your fingertips.

If this is your first time starting the device, you will be led through a short set-up process. Creating an account is as simple as logging into your Google account. Indeed, the most time-consuming aspect of setting up your notebook will posing for your profile picture.

What appears to be a Chrome web-browser will fully occupy the screen once the initial set-up is complete. After a desperate search for a “minimize” button, it will dawn upon you that there is none. Chrome OS is essentially, well, Google Chrome. And, according to Google, that’s the beauty of it. Chrome OS thrusts you skyward into the clouds, forcing you to bid farewell to the tangible ground of the traditional operating system.

Google’s hook for its Chrome OS is the ease with which it allows you to access the Internet. In order to streamline your web surfing experience, Chrome OS trims away all the extra fat of the typical operating system. No longer will you need to fret about security and maintenance, as Chrome OS is virtually impervious to security threats and updates automatically. On the off-chance that a virus does penetrate the system, you can simply reinstall the OS—after all, everything is stored in the cloud. By eliminating concerns associated with bulkier operating systems, Chrome OS succeeds in fully immersing you in the web.

Chrome OS does have a file system, albeit one that can only be accessed when attaching or uploading files to the web. Screnshot by Akshay Agrawal.

While Chrome OS bears a striking resemblance to its browser counterpart, it does offer a few additional features. For instance, the OS has a primitive file system and a downloads folder. Currently, Chrome OS purportedly supports .doc, .pdf, .html, and image files; however, I have been unsuccessful in my attempts to open .doc files. Given that Chrome OS is still pre-beta, it’s almost certain that this problem will be resolved.

Underneath Chrome OS GUI is Google’s version of Linux, which can be accessed by flipping a switch in the battery compartment. The next time the device boots up, it will enter developer mode, and pushing “ctrl” + “alt” + “t” will bring up Linux.

Chrome OS displays an ominous message while booting up into developer mode, which allows you to access the Linux shell. Photo by Akshay Agrawal.

Despite the addition of these features, Chrome OS seems a little lacking. Chrome OS is almost indistinguishable from a Chrome browser, and there’s simply not that much to do. Granted, Chrome OS remains in its initial stages, and Google may decide to add more functionality.

Chrome OS-specific Hardware
The chiclet keyboard is a prime example of hardware modified to accommodate software. Keeping with Chrome OS’ trend of simplification, Google has eliminated keys that they deemed to be superfluous. Caps lock has been replaced by a search button that pops up a new tab. In place of the function keys are web-specific keys; highlights include dedicated back and forward keys and a full screen key, all of which enhance your web-surfing experience. And, of course, the PC’s window key has been eliminated completely.

The Cr-48's keyboard is specifically designed for Chrome OS. Changes include the absence of caps lock and the function keys, and the addition of search and web-specific keys. Photo by Akshay Agrawal.

As for the trackpad, let it suffice to say that it often launches the cursor into a berserk, frenzied dance when touched with multiple fingers.

The Verdict
Any potential advantages of the Chrome OS laptop cannot be realized until cloud computing becomes ubiquitous. As of now, the cloud only serves entertainment and lightweight work purposes. Perhaps when cloud computing becomes more widespread, there will be a greater incentive to purchase a Chrome OS laptop and drift off into the clouds. Until then, I prefer to keep my feet planted firmly on the ground