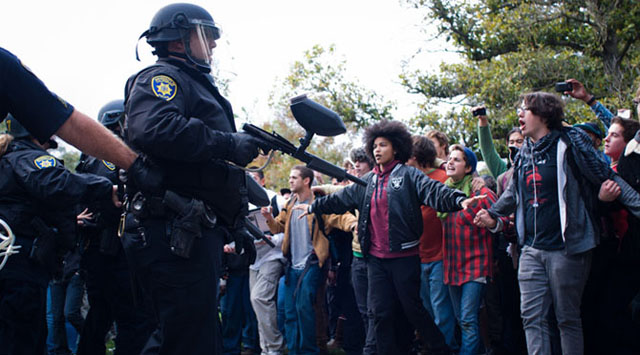 Occupy Davis protesters back away from UC police after the controversial pepper spraying incident on Nov. 18. Police violence against protesters on UC campuses triggered much backlash among the student body, including the alumni that participated in the protest movement. Photo used with permission of Class of 2010 alumnus Gene Ang.

It is 2 a.m. on Nov. 15, and class of 2010 alumna Summayah Naguib and UC Berkeley sophomore is just one of the thousands of students occupying the Sproul Plaza at UC Berkeley in protest of the proposed eight to 16 percent hike in annual UC tuition fees. She sees some students shivering, covered in blankets — some on the steps of Sproul Hall and some on the roof.

“It’s just a feeling that I don’t really know how to describe,” Naguib said. “It’s amazing to see so much cohesion and unity.”

On July 14, according to a UC Newsroom article UC President Mark Yudof’s proposal of an additional 9.6 percent annual tuition increase was passed by the UC Board of Regents on with a 14-4 vote. This fee hike, in addition to the proposed eight percent fee increase passed in November 2010, lead to much discontent among the UC students. According to Naguib, the protests were driven by the perceived separation between the “one percent” of wealthy Regents and students who could afford or benefit from such hikes and the other “99 percent” of the student body that felt that it’s voices were not heard.

On Nov. 9, “The Day of Action”, over 1,000 protestors marched around the UC Berkeley campus and a local Bank of America. Such demonstrations included “teach outs”, which were followed by a general strike that Naguib attended on Nov. 15. The teach outs in particular involved UC Berkeley professors supporting the students by raising awareness about issues such as wealth imbalance and police brutality.

Taking action
After observing what she believed to be a separation between the “one percent” of students who could afford the tuition hike and the rest of the student body, Naguib chose to take an active role in the Occupy Cal General Assemblies and protests. Though she had previously attended the protest against the controversial Berkeley College Republicans’ bake sale, in which the prices of items sold were set differently for students of different races as a jab at the admissions offices’ alleged preference towards minorities, she noticed a stark contrast between the two protests.

”[Occupy Cal protests] definitely attracted a lot more people including the general public,” Naguib said. “The recent [protest] was more active and demands were being made, whereas before [the GOP bake sale protest] was just a statement being made.”

Naguib also felt that because the concept of economic disadvantages and unequal distribution of wealth amongst society members is not limited to just students and their families, the protest was more than just a temporary demonstration at UC Berkeley.

“Thankfully, I come from a family where tuition isn’t a huge issue, but it’s not like it’s an easy thing to fork over that money,” Naguib said. “Even though I wasn’t personally affected, I have family members who were personally affected and I was more sympathetic with the Occupy movement even when it wasn’t specific to the university.”

According to Naguib, East Bay residents also voiced their discontent over the proposed annual additional 9.6 percent fee hike by attending the General Assemblies, contributing to an overall diversity in the demonstration participants.

Raising awareness but lacking direction
Class of 2011 alumnus and UC Berkeley freshman Abhishek Kumar participated in the Nov. 9 and Nov. 15 Occupy Cal protests. Kumar identifies with the overarching Occupy movement, rather than frustration with the proposed tuition hikes specifically, as his motivation to protest. Nonetheless, he acknowledges the merits of the tuition-centric demonstrations.

“I’m sure that without this kind of movement, people would just be looking to go ahead and raise our tuition … instead of looking for other inefficiencies, maybe within the administration or [within] programs that are not necessarily as effective anymore,” Kumar said.

Kumar does support the Occupy arguments about wealth distribution: however, he ultimately decided to abstain from further protests due to what he perceives as a lack of cohesiveness and direction within the movement.

“There’s people saying [things] like ‘We should forgive all student debt’, [which] sounds great if you’re a student but it’s not really a fiscally viable option, and people are just viewing the movement as just a bunch of crazies,” Kumar said.

If the movement were to distill its various thoughts into a concrete list of demands, however, Kumar thinks that the protesters’ ability to exert a political influence over Congress would increase, as would the chance of reaping tangible benefits from the protests.

“Stop beating students”
Naguib specifically cited the police brutality exercised on students in the encampments as a factor that led to much confusion as to what the focus of the protests was. Rather than protesting against the fee hikes, the media attention and new protests centered around law enforcement. Though the UC Poilce Department and UC Berkeley Chancellor Robert Birgeneau claim that the students were violating campus policies that prohibit encampments on campus property, Naguib nonetheless felt that the actions of the police were unjustified, and that the students who chanted “Stop beating students” when struck by the police were within their rights.

“I was disgusted. I couldn’t believe that that was actually happening. You’ve heard about how law enforcement should be with the people. You wouldn’t think that something like that would happen in this country in this day and age, and yet it did,” Naguib said. “I think that in itself has rallied more students to come out and see that there really is something wrong with our government system.”

The clash between the police and students at UC Berkeley did, in part, influence class of 2011 alumna Aditi Shakkarwar in her decision to participate in the protest movement at UC Davis, where she is currently a freshman. While she did not witness the highly-publicized Nov. 18 pepper spray incident, she did partake in the Nov. 15 occupation of the Mrak Hall Administration building. Shakkarwar stated that, in addition to spreading awareness about student rights, she joined the demonstration in order to voice her opposition to the proposed tuition hikes.

A part of history
Although some, like Kumar, believe that the absence of offered solutions by the Occupy demonstrators detracts from their movement, Shakkarwar believes that it is important to participate in the protests nonetheless.

“If you think that nothing is going to get done, nothing will get done, and if you try to get something done, even if nothing does get done, at least you tried,” Shakkarwar said.

For Naguib, the overall experience of being actively involved in such nationwide movements has been worthwhile regardless of what the end result will be.

“If anything, on the smallest level, it’s just to be part of history. I think people see college students getting riled up and they think that they’re in their youth and they’re going crazy and will grow out of it. But I don’t think that’s the case. I think that this is the age that we’re most passionate about the things that we’re passionate about,” Naguib said. “Now I definitely understand why Berkeley has the reputation that it does.”