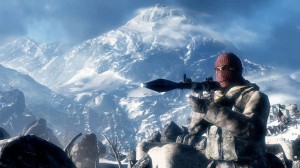 Continuing with their trend of injecting controversy into the video game world, EA will allow players to assume the role of the Taliban in their upcoming game Medal of Honor, which is primarily set in Afghanistan. The contention revolves around the game’s multiplayer component, which pits US troops against the Taliban

As is the norm in the video game industry, people have begun spewing vitriolic venom towards the game’s inclusion of the Taliban. Karen Meredith, a mother who lost her son in Iraq, censured the game on Fox News.

“A video game based on a current war…[doesn’t make] any sense at all. It’s disrespectful,” Meredith said. Her argument that Medal of Honor disrespects soldiers is understandable; a woman whose son perished in war must harbor sensitivities to depicting Americans killed for entertainment purposes, even if those Americans are virtual. Nonetheless, her thinking is not supported by many US soldiers. In an interview session conducted by gamrFeed, Nicholas Rice of the army stated, “I don’t think playing the Taliban is any different than playing any other ‘bad guys’ in any other game.”

Perhaps more alarming than Meredith’s comments are those of Britain’s defense minister, Liam Fox, who has gone as far to exhort retailers to issue a ban on Medal of Honor.

“[It is] shocking that someone would think it acceptable to recreate the acts of the Taliban against British soldiers. At the hands of the Taliban, children have lost fathers and wives have lost husbands, ” Fox stated. “I would urge retailers to show their support for our armed forces and ban this tasteless product.”

It’s one thing to express one’s disapproval of a game; it’s another thing entirely to suggest to ban it.

Games are a form of entertainment, and as such are protected by the freedoms granted in the Bill of Rights. Rather than remove the game from the shelves and violate the very principles that our nation was built upon, consumers who oppose the game ought to simply refrain from purchasing it. In short, let the sales figures do the talking.

Many gamers are frustrated by statements like those of Meredith or Fox. After all, Medal of Honor is not advocating the Taliban in the slightest. Players playing as the Taliban will not enter multiplayer matches with a mentality to kill American soldiers; the Taliban just serve as a multiplayer skin. As many gamers profess, all that they think about are the usernames of their opponents, “leveling up,” and boosting their “KD” (Kill to Death ratio).

The controversy, then, is fueled by miscommunication; if gamers would explain their thought process to people like Meredith, instead of indignantly yelling in the forums and labeling them as morons, perhaps the non-gaming world would develop a better understanding of EA’s Medal of Honor. And maybe, just maybe, the stigma on violent video games would begin to disappear.

Continuing with their trend of injecting controversy into the video game world, EA will allow players to assume the role of the Taliban in their upcoming game Medal of Honor, which is primarily set in Afghanistan. The contention revolves around the game’s multiplayer component, which pits US troops against the Taliban.